Spiegelmers, the new drug class consisting of mirror-image aptamers created by Germany’s NOXXON Pharma, achieved an important clinical milestone this week. The next day, the lead antisense product of Prosensa garnered one of the largest recent pharma-biotech deals (potential total value: $680 million) from GSK. Taken together, these announcements provide validation not only for Spiegelmers and antisense drugs but also for nucleic-acid-based drugs in general.

It is my belief that nucleic acids, especially aptamers and RNAi but also some other categories, hold huge promise for drug development, a belief that has been validated by pharma interest in some areas (think RNAi) more than in others (gene therapy). What is still missing are late-stage clinical successes and sales: the only two nucleic-acid-based therapies to make it to the market, Isis’ Vitravene™ for AIDS-related eye disease and Eyetech’s Macugen™ for wet AMD (partnered with Pfizer then sold along with the parent company to OSI Pharmaceuticals), have had at best limited marketing success.

According to a company press release from Monday 12 October, NOXXON’s Spiegelmers were safe, well tolerated and had good PK and mechanism-related effects in the Phase 1 trial of the company’s chemokine inhibitor NOX-E36. The trial was carried out earlier this year in 72 healthy UK volunteers. This bodes well, of course, for the company, and for the Spiegelmers product class, for which this was the first clinical trial. Indeed, any lingering concerns about immunogenicity caused by the non-physiological nature of Spiegelmers (see Fig. 1) were allayed in this trial. In terms of safety, the molecules came through with flying colors. 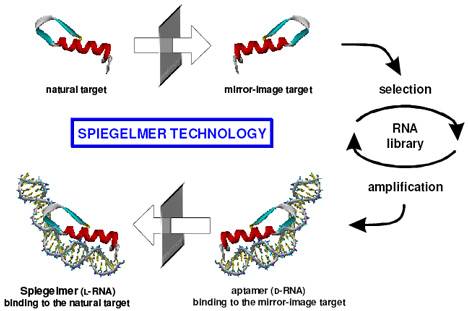 Fig. 1: Through the looking glass – twice. Spiegelmer precursors are synthesized against a mirror-image version of their protein target; the actual spiegelmers are mirror-reversed versions (created from L-RNA nucleotides) of the best binders (Image courtesy Medgadget.com)

In the CBT Advisors database, we’ve listed eight broad categories of nucleic-acid-based therapeutics besides gene therapy (see Table 1 below for an excerpt) as well as the most advanced entrants in each category. After a boom in the early-to-mid 1990s, at a time when Gilead Sciences was raising money as an antisense company, this diverse group has fallen on harder times. RNAi’s progress has been slowed by delivery challenges. Antisense is also moving more slowly through clinical development than optimists had expected. Macugen, launched in 2005, sold well only until two antibodies from Genentech, Lucentis and then Avastin, quickly took over the wet AMD market. Generally, aptamers and other nucleic-acid-based drugs have not yet fulfilled their initial promise.

This could change soon, though, based on three factors: these drug classes’ ability to hit targets inaccessible to conventional chemical approaches; their quick cycle times during drug discovery based upon the use of techniques that mimic natural selection; and rapidly improving delivery modalities. One brief example of each area:

NOXXON’s Spiegelmer drug E36 targets MCP-1, a chemokine (short for monocyte chemoattractant protein-1) that docks on the CCR-2 receptor on cells in many tissues. Almost all other molecules directed toward this pathway that are in clinical or even preclinical studies target not MCP-1 but rather its receptor CCR-2. The advantages of targeting MCP-1 itself remain to be proven in efficacy studies but they could be significant: greater potency, better pharmacodynamics and faster response time are all strong possibilities. Plus, in contrast to antibodies, Spiegelmers are chemical entities that do not require biologics production facilities. Data from this first-ever clinical trial of Spiegelmers showed dose-linear pharmacokinetics and a dose-dependent decrease in peripheral blood monocytes, consistent with the mode of action of NOX-E36 – neutralization of MCP-1. And of course, approaches like Spiegelmers that target the signal MCP-1 could also be used to complement existing approaches targeting the receptor.

Like its fellow aptamer company Archemix, NOXXON, a Berlin-based, VC-backed private company holds a license to SELEX (Systematic Evolution of Ligands by EXponential Enrichment), a patented method for generating potent aptamer binders. These companies have reduced to practice the ability to quickly generate aptamers to almost any target. When the targets are circulating proteins, such as MCP-1, there is no need for further chemistry or conjugation to improve delivery.

For those targets that are intracellular in nature or otherwise hard to reach, delivery methods are continually improving. For example, in the September, 2009, issue of Nature Biotechnology, there is an exciting paper by Kortylewski et al. reporting successful targeting of tumor cells using an siRNA covalently linked to oligonucleotide agonists for TLR-9 (toll-like receptor 9). These agonists are similar to the CpGs currently in Phase 3 trials of a novel hepatitis B vaccine (Heplisav™) being conducted by Dynavax. The Kortylewski group, led by Hua Yu at the City of Hope Medical Center, achieved potent antitumor immune responses in mice bearing both mouse tumors and human tumors. These results build on earlier findings using antibody-mediated delivery and aptamer-siRNA chimeras. Meantime, most nucleic acid therapeutics companies are pursuing multiple avenues to achieve intraorgan and intracellular delivery of their molecules. To say delivery is a top priority, especially for RNAi companies, would be an understatement.

Meantime, partnering activity continues apace. This week (Tues. Oct. 13) Prosensa, a Netherlands-based, VC-backed private company with an antisense-like molecule to treat Duchenne muscular dystrophy (DMD), signed a deal with GSK for $25 million up front and $655 million in milestones, plus “high double-digit royalties,” according to the GSK press release. The release goes on, “PRO051, the first molecule with this mechanism of action, acts by skipping exon 51 of the dystrophin gene. Mutations in the dystrophin gene result in the absence of normal dystrophin protein, which is necessary for proper muscle cell function.”

Other approaches to treat DMD (for instance gene therapy) have failed, which helps explain why Prosensa’s early data helped the company land such a lucrative partnership. NOXXON already has deals with Pfizer, Roche and Lilly. Many of the other nucleic acid companies in Table 1, most notably Alnylam, have also struck high-value deals with pharma.

In the early days of RNA- and DNA-based therapeutics, company values climbed a “wall of worry” amid speculation that such products would never work. Even the  early clinical success of Macugen and the 2006 acquisition of RNAi drug development company Sirna Therapeutics by Merck & Co. for $1.1 billion did not do much to change the prevalent skepticism. In the meantime, several nucleic-acid-based therapeutics companies trade at healthy valuations and the previous blanket rejection among some skeptics has shifted to a more nuanced analysis. The jury is still out on these advances but the chance of long-term value creation just went up.