New, breathing “lung on a chip” shows the way for expanded use of tissue culture in preclinical development of new drugs

Harvard researchers Dongeun Huh, Don Ingber and the Ingber team on Friday (25 June 2010) published in Science an impressive advance in organotypic tissue culture that could someday be adopted as a viable alternative to animal experiments: a “lung on a chip” including both human cells and a bioengineered boundary layer that is both porous and flexible. The new chip overcomes limitations of previous 3-D organ models in at least two ways: both by recreating the body-environment interface featuring a multilayered set of membranes with communication across them, which in itself is remarkable enough, but also by allowing dynamic mechanical forces (think “breathing”) to be applied and showing the response. 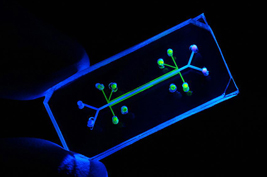 On a recent visit to Ingber’s lab, in the new and hiply designed Wyss Institute for Biologically Inspired Engineering at Harvard University, we got to see the device, a rubbery object more reminiscent of a clear pencil eraser than of a futuristic biochip. The lung-on-a-chip sandwiches a layer of epithelium and a layer of endothelium, both formed from living cells, around a flexible synthetic boundary layer. Vacuum chambers on either side provide stretching and shear forces that mimic those in real lung air sacs (alveoli). The cells find the environment so natural that they secrete surfactant, the normal coating found on air-contacting cells in the lung.

What makes this new technology stand out is its ability to demonstrate and even explain in-vivo-like reactions. The lung cells on the chip were shown to respond to external stimuli such as nanoparticle irritants or bacteria. “We could watch the entire inflammatory response,” Ingber told a radio interviewer. “One thing we found is that [environmental pollutants] went across to the capillary channel with a low level of efficiency but when we had physiological breathing, there was an eightfold increase in how many particles got across and we saw toxic and inflammatory reactions. This was not known before and we were able to confirm it by going back into the whole-animal model.”

The lung chip is the latest example of the trend we noted in our Boston Biotech Watch post last October (“Coming soon to a Pharma near you: complex tissue culture models”). Ingber told the radio station that the chip can potentially shortcut the time it takes to get drugs through the development process, which, “…as we all know, is incredibly expensive .… Animal studies are not only costly and time-consuming, but they often don’t predict what happens in humans.”

We think that this device will quickly come to the attention of pharmaceutical companies eager to reduce clinical failure rates and eliminate costly animal experimentation. Here are some attributes that make us think that (we’ve seen many of these reflected in efforts by other labs in other organs):

This technology’s new attributes – responses to dynamic forces, use of translucent materials to allow for real-time observation and the ability for cost-effective mass production  – make it truly stand out.

The lung chip represents an interesting bridge between skin models, which are already in widespread use in both the pharmaceutical and the cosmetics industries, and realistic models of even more complex tissues like liver, kidney and heart. These results might also accelerate research on the engineering of replacement tissues for medical use.

In a related article appearing the same day, Science published work from Yale professor Laura Niklason (scientific founder & CSO of a tissue engineering company called Humacyte focused on lab-grown blood vessel grafts) who reconstituted a rat lung in the lab by removing lung cells from a young rat, growing the cells up in a bioreactor and replacing them into the empty lung scaffold in the living animal. She was able to get the reconstituted rat lungs to breathe and behave consistently with normal lungs for a couple of hours.

The lung stories made it big into the media. This well-written press release helped. For instance, the Science Friday show on US National Public Radio ran a 17-minute feature (once on the site, click on link at upper left for Podcast) and the Boston Globe put it on the front page. 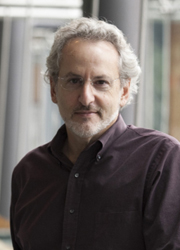 Ingber’s efforts do not stop there. In a lecture we heard him give at Harvard in March, he described efforts to develop “programmable nanomaterials” for implantation  in the body. Other organs the institute is looking at include “peristalsing gut on a chip.” Tissue by tissue, organ by organ, Ingber plans over time to link the models together with “engineered channels carrying fluid” to create “a synthetic human on a chip.” Stay tuned for more news from the fast-moving edge of organotypic tissue culture.

Here, we describe a biomimetic microsystem that reconstitutes the critical functional alveolar-capillary interface of the human lung. This bioinspired microdevice reproduces complex integrated organ-level responses to bacteria and inflammatory cytokines introduced into the alveolar space. In nanotoxicology studies, this lung mimic revealed that cyclic mechanical strain accentuates toxic and inflammatory responses of the lung to silica nanoparticles. Mechanical strain also enhances epithelial and endothelial uptake of nanoparticulates and stimulates their transport into the underlying microvascular channel. Similar effects of physiological breathing on nanoparticle absorption are observed in whole mouse lung. Mechanically active “organ-on-a-chip” microdevices that reconstitute tissue-tissue interfaces critical to organ function may therefore expand the capabilities of cell culture models and provide low-cost alternatives to animal and clinical studies for drug screening and toxicology applications.

2 responses to “New, breathing “lung on a chip” shows the way for expanded use of tissue culture in preclinical development of new drugs”